Halloween in Spring. A Series: "The End of the Day's Work"

NOTE: This series, "Halloween in the Spring," is based on the posts I wrote for my Halloween 2020 Take-Over of AHNCA's (Art Historians of Nineteenth Century Art) social media accounts. It's a jolly bit of writing and the inspiration for this blog. I've left the posts almost identical to the originals to preserve the rollicking tone; however, I've added links to the original sources, museum websites, or other information you, dear reader, might find interesting. Without further ado, it's time to celebrate Halloween in the springtime!
Sleepy Hollow Cemetery was established in 1849 as Tarrytown Cemetery. The name was changed to honor Washington Irving’s dying request to rename the grounds. A number of notable New Yorkers are buried there, including members of the Astor, Rockefeller, and Carnegie families. Art lovers can visit the grave of Jasper Francis Crosby and marvel at the funerary art by Louis Comfort Tiffany, Augustus Saint-Gaudens, and Karl Bitter.

The Henry Villard Memorial, "The End of the Day’s Work," 1905, by Karl Bitter (1867-1915) is a stunning example of funerary art. Tucked into the landscape, this bold design depicts a young blacksmith at rest. His body is limp and he stares heavenwards, indicating the contemplation at the end of one’s life. The symbolism of the blacksmith with his hammer and anvil relates to the occupation of the man who is interred here: Henry Villard (b. Ferninand Heinrich Gustav Hilgard (1825-1900). 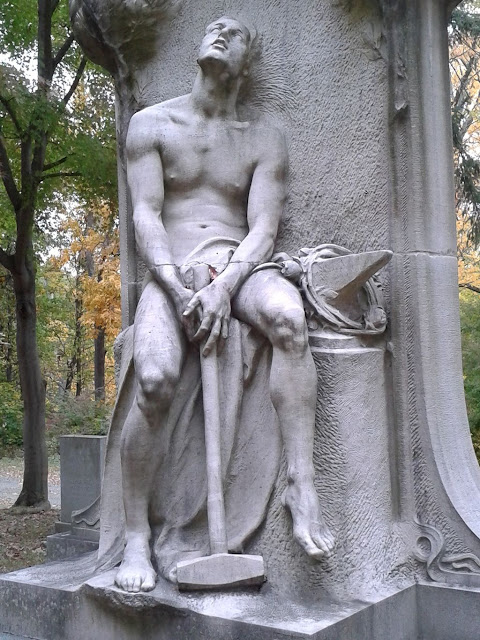 Born in the Kingdom of Bavaria, Villard emigrated to the US as a teenager and changed his name so that his parents couldn’t find him. Apparently, Villard’s liberal politics clashed with those of his conservative father. He soon became a newspaper journalist and covered the Civil War and the Austro-Prussian War for the Chicago Tribune. Villard was involved in the American railroad industry and became the president of the Northern Pacific Railroad. He also acquired the NY Evening Post and The Nation. 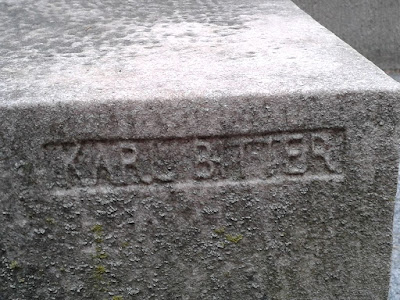 Karl Bitter (1867-1915) was born in Vienna and trained at the Kunstgewerbeschule and the Kunstakademie. He emigrated to the US in 1881, eventually establishing his own studio on 13th Street and his artistic reputation with the elite families of NYC. His many commissions included architectural sculptures, monuments, and funerary memorials like this one. In addition to his sculptural commissions, Bitter held prestigious positions in the National Sculpture Society, the Pan-American Exposition (1901), St. Louis Exposition (1904), and the Panama–Pacific International Exposition (1915).